Is trhe Tide Turning Against The New Normal

The winter 'flu season is upon us and that means the usual seasonal hysteria about the need to get vaccinated will be unleashed, again multiplied to the power of ten as the threat posed by what is for most of us a minor but inconvenient illness is linked to the similarly minor risk of COVID, the virus that has reduced the world to chaos for the past two years without killing very many people. toxic

Official figures show that COVID is not a serious threat unless you are very old, very sick or both, and recent news from Italy, where the official COVID death toll was recently reduced by 97% by eliminating all the fraudulent jiggery pokery used to inflate the death toll statistics and pump up the hysteria.

That’s right, as this blog has been telling you for the past two years, the pandemic of fear has little to do with any deadly virus, and the push to make us all accept injection with a shot of toxic shite that is not actually a vaccine because it does not confer immunity on those injected with it, (but may have serious, long term side effects though we are not allowed to discuss that,) it is the season for the global-capitalist ruling classes to whip the New Normal masses into a state of mindless mass hysteria over the imaginary apocalypse that they have used as an excuse to cancel Christmas for the last two years.

The vast majority of the Western world has been browbeaten into a  state of medieval serfdom by a pseudo - medical tyranny which demands we show your “vaccine - status papers” to access basic public amenities, attend theatres or sports events or go shopping. And yet the vaccines we are being bullied into accepting not only fail to provide immunity to the rebranded winter 'flu, they also do not prevent vaccinated people passing the virus on to other vaccinated people.

People who refuse to get experimentally “vaccinated” against a virus that causes mild-to-moderate symptoms (or, often, no symptoms whatsoever) in about 95% of the infected, and the overall infection fatality rate of which is approximately 0.1% to 0.5%, are being systematically segregated, stripped of their jobs, denied medical treatment, demonized as “a danger to society,” censored, fined, and otherwise persecuted in a scenario resembling the plot of the 1970s Donald Sutherland film Invasion of the Body Snatchers..

If you are thinking this souds like a but of anti - vaxxer hysteria generation take a look at the headline on this front page story from the Brisbane, Australia Courier - Mail newspaper… 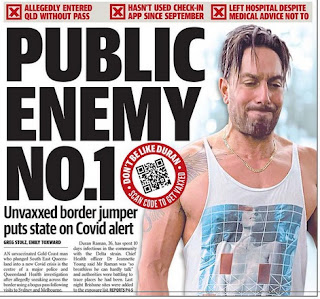 Since the vaccine roll out began Australia, rather surprisingly for a country whose citizens have a reputation for being independent and having a healthy contempt for authority, has led the charge towards vaccine fascism, but it looks as if the neo - Nazi the Great New Normal Purge is on and the vaccine refusniks are the new Jews. “The Unvaccinated” and other infidels and heretics are being hunted by fanatical, hate mobs, dragged before the New Normal Inquisition, fired from jobs, excluded from social activity and made into pariahs all around the world.

In New Normal Germany, where outgoing leaders Hausfrau - Volksfuhrer Merkel has never been averse to a bit of authoritarianism when she needed to bring the masses to heel, popular footballer Joshua Kimmich is being publicly hung drawn and quartered for refusing to submit to being “vaccinated” and profess his faith in the New Normal World Order.A similar fate has befallen NFL footballer Aaron Rodgers is being hounded by the mob, even though he has contracted COVID (well, tested positive which is not quite the same thing as the test gives 80% false positives,) recoverred within a few days and now has better and longer lasting immunity that any of the vaccines provide.

Also n the USA, “the Unvaccinated” stand accused of murdering Colin Powell, an 84-year-old, cancer-ridden war criminal although as stated above, an unvaccinated person is no more likely to pass on the infection than a fully vacc.inated one as the 'vaccine' does not immunise.

Australia (uber alles?) is planning to imprison people and fine them $90,000 for the “crime” of not wearing a medical-looking mask, or attempted worship at a synagogue, or whatever. Another familiar tactic of the hysteria merchants is the pious emotional blackmail: we should show respect for the COVID dead by not questioning the difference between dying OF COVID and dying WITH COVID or speculating irresponsibly on social media about the effectiveness of the vaccines. This reminds one of the immense non-sequitur after 9/11 when one angry defender of the official account objected to the “truthers” by saying, “Don’t you know nearly three thousand people died that day?”

It is also noteworthy that, just as some deaths are “hushed up” from the start, there are others loudly trumpeted but which then suspiciously vanish e.g. four year old Kali Cook from Galveston County, Texas, who died “of COVID”, this being blasted over all the media as proof that children are at risk and must be vaccinated with the clotshot as mainstream media fell over themselves trying to outdo each other in sensationalising this sad little story. But then there was a small headline  on the inner pages suggesting we don’t jump to conclusions till the autopsy. After which – nothing!

In Florida fanatical school staff tied a medical-looking mask to the face of a non-verbal Downs-syndrome girl with nylon cord, day after day, for over six weeks, until her father discovered what they were doing, proving once again that COVID derangement syndrome is a far more serious disease than COVID. Or maybe that you have to be stark raving bonkers to become a schoolteacher these days. However it has been encoraging to see that the story, once it was brokenm in alt_media has received fairly widespread coverage and drawn attention to they extreme actions of those who have signed up to the pandemic of fear.

The situation had to become too crazy to remain credible and there are signs even journalists working for far left news organisations are starting to smell a rat.

In a fascinating thread on Twitter two of the major CNN stars tentatively admitted that their rhetorical posture — everyone who dissents in any way from our decrees is racist and/or stupid — is alienating and ugly, but they didn’t realize this because they live in an “echo chamber” of like-minded liberals:

Van Jones: “Democrats are coming across as annoying and offensive and out-of-touch. I think there is a message here.”

Anderson Cooper. “It seems annoying to a lot of people”

The CNN thing is not explicitly about Covid or vaccines, but it is explicitly about a crisis of credibility for the mass media’s pundits, experts and pseudoscientists - on the pandemic, climate change, Chinese expansionism, the supply chain crisis etc..

Are mainstream media looking at their falling numbers and the likely knock on effect on revenue and responding to the public mood instead of trying to manipulate opinion? we starting to sense a shift here?

Besides the global rejection of the contrived COVID crisis, the smell of blood in the water over COP26 is attracting the attention of the media sharks who know their paying customers are fed up of endless repetition of propaganda narratives.

COP 26 failed when Xi announced he wasn’t attending, then Putin, then Modi of India walked in with a demand for $1tn or he’s not playing ball. This followed 22 smaller nations presenting US ambassador to the United Nations, John  Kerry with a bill for $750bn in unpaid money, promised over decades of COP promises of funds to help India clean up its act on CO2 emissions. To top it off 55 other countries are demanding money with menaces, threatening to abandon any further pretence of saving the planet by stifling their countries growth and sacrificing prosperity at the alter of the god Net Zero.

Boris had to travel to Westminster to face the Tory big guns of David Davis, Steve Baker, Graham Brady and Ian Duncan Smith, who have emerged at spokesmen for a large group of Conservative MPs who are appalled at the government's willingness to embrace the political philosophy of Cultural Marxism and to bypass parliament and rule by authoritarian decree. All of the aforementioned have already published media articles criticizing theohnson cabinet's NetZero policy. The dissent is likely to have have grown into a rebellion against the Prime Minister during his Glasgow sjourn.

COP26 was never going to be anything but a taxpayer funded jolly for tax - eaters and a chance for billionaires like Amazon's Jeff Bezos to show off their private jets even as they lecture the rest of us on how important it is to reduce our carbon footprint, no matter what sacrifices must be made both as individuals or communities. The low hanging fruit of the climate change effort was grabbed on day one with announcements of halting and reversing deforestation, promises that have been made in the past and never fulfilled.

There will be no meaningful decisions made, no significant agreements signed, no consensus on how to halt climate change, how can there be, the leader of the biggest emitter of CO2 boycotted the event. Weirdie - beardies will preach of the need to ban the internal combustion engine and switch to driving pimped up golf trolleys in spite of its becoming blatantly obvious that not only is there insufficient reserves of essential materials to make a set of batteries for the electric replacement for every vehicle currently on the road, but that control of most sources of these essential materials lies in the hands of 'difficult nations' such as China, Russia and their client states.

Biden’s £3.5Tn New Green Deal is already in trouble in Congress, and now Republicans are doing well in the US in local elections. If Biden doesn’t change course quickly on that and covid, when the 2022 midterms come round, he’ll wonder where all his support went, if he even notices.

Were there ever a covid crisis or a climate crisis, you can be sure this is it. The tipping point has been reached and political heads may well roll unless there is some enthusiastic back-pedalling. And you can bet we won’t be seeing much of XR and IB on the streets of the UK for much longer, they will only serve as an embarrassment to Boris.

It is, the perfect storm and it might yet sink The Great Reset, The New Normal and the push to establish a global authoritarian government.