On February 20th of 2014 the world was shocked by video footage of snipers firing on protesters in Kiev Ukraine. Twenty one people were murdered, and it was widely assumed that President Victor Yanukovich and his supporters were behind the attacks. However a phone conversation between EU foreign policy chief Cathy Ashton and Estonia’s foreign minister Urmas Paet leaked to the public on March 5th reveals that the snipers in were actually from the new coalition government, and that Western diplomats knew this and covered it up.

This report and embedded audio will provide evidence that the crimes against humanity committed in Kiev earlier this year were in fact committed by the new coalition government (puppet - masters of Zelenskyy the Clown,) and that officials in the E.U. and the United States knew full well who committed these crimes and that they are protecting and financially supporting the real criminals. But that phone call went on for quite a long time so here's a transcript of the most damning section.

Urmas Paet: “All the evidence shows that the people who were killed by snipers from both sides, among police men and people in the street, that they were the same snipers killing people from both sides.”
Cathy Ashton: “Well that’s, yeah…”
Urmas Paet: “And she also showed me some photos and she said that has medical doctor, she can say that it is the same handwriting…”
Cathy Ashton: “Yeah…”
Urmas Paet: “Same type of bullets… and it’s really disturbing that now the new coalition, that they don’t want to investigate what exactly happened. So that there is now stronger and stronger understanding that behind the snipers, it was not Yanukovich, but it was somebody from the new coalition.”

For some reason mainstream media in the USA, European Union and NATO allies did not think the crimes of the US / NATO puppet regime were worth covering, in the same way as that have decided the thousands of deaths and serious illnesses related to COVID vaccines were not worth bringing to out attention.

Instead of reporting the truth about the Ukrainian regime western deep state  propaganda agencies spun an official narrative to be peddled corporate media that the new government were peaceful activists who only wanted a chance to join the European Union.

The real story is much more ominous. Far from being supporters of Yanukovich, it turns out that the snipers were working for the new government, most powerful and influential contingent of which is a coalition of self - confessed fascists and Neo-Nazis, and they aren’t peaceful. In fact they are extremely brutal.

Here is a recording of the leaked call between Ashton and Paet:

The most prominent among these groups is an organization called Svoboda. The Svoboda party which traces its roots to the Ukrainian partisan army of World War II, was loosely allied with Nazi Germany. Until 2004, Svoboda had been called the Social-Nationalist Party, a deliberate reference to the National Socialism of the Nazis.

We’re not throwing the term Neo-Nazi around as an empty slur here. The leader of Svoboda, Oleh Tyahnybok, has openly targeted Jews and ethnic Russians in Ukraine for many years. In 2004 he was kicked out of Viktor Yushenko’s government for a speech calling for Ukrainians to fight against a “Muscovite-Jewish mafia”, and in 2005 he signed his name to an open letter to the leadership of Ukraine entitled “Stop the Criminal Activities of Organised Jewry”.

And none of this was a secret. The BBC was already reporting on the danger that Svoboda’s rise posed back in 2012, and the EU passed a resolution that same year condemning Svoboda, as “racist, anti-Semitic and xenophobic”. Yet somehow the U.S. government thought it was appropriate to back these extremists. 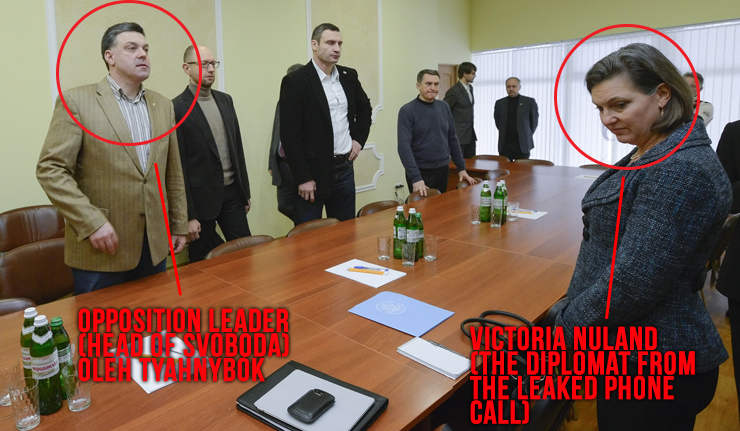 
Has The Green Blob's War On Fossil Fuels Been Lost On The Battlefields Of Ukraine
With some energy sector opinion makers already pronouncing the 'net zero' agenda is already dead as oil and gas supplies from Russia dry up due to NATO / EU sanctions and Moscow's retaliatory export bans which have only been in force a week at the most, governments in the liberal democracies of Europe and North America are already talking about starting up redundant coal and nuclear power stations, the UK, Netherlands and other nations with offshore gas operations in the North Sea are suddenly finding that it may now be economically viable to start pumping again and (whisper it ever so quietly,) coal is coming back into the reckoning as an energy source ...