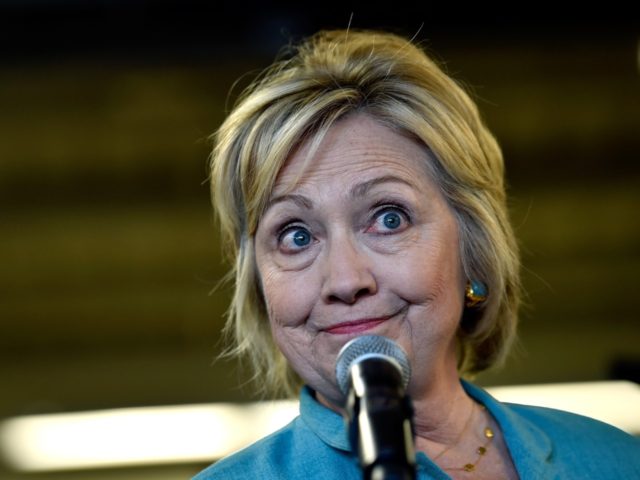 It's coming up to election time again in the USA and sure enought some idiot over the pond has allowed a drop of blood to fall on the desiccated lips of Hillary Clinton and the leader of the Democratic Party undead faction has reanimated to ensure the debate, on the Democrat side at least, never risis above the level of stupid set in 2016 when Hillary famously lost to Donad Trump.


After trying to grab a few headlines yesterday by revamping her totally discredited claims that Trump was able to steal the presidency from her by collaborating with "The Russians," she was humiliated when a three year, multi - million dollar investigation concluded this year that there was no evidence of collaboration between the Trump Campaign and Russia.

Undeterred, (well self awareness was never one of her strengths,) last weekend Hillary decided to meddle in the UK election by accusing Boris Johnson's government of concealing a reports from the Parliamentary Intelligence Committee into Russian influence in british political campaigns of doing so "because The Conservatives are collaborating with The Russians. Somebody needs to tell silly Hilly to change the record, particularly as information leaked by left leaning news website BuzzFeed reports no evidence of Russian meddling in UK elections was found.

But, adding fuel to rumours that she is about to launch another bid to win the Democrat nomination, today we learned that attention seeking Hillary has made another bid to get herself on the front pages and at the top of the news broadcasts.

Speaking alongside daughter Chelsea at the London launch of their book – The Book Of Gutsy Women: Favourite Stories Of Courage And Resilience, in which they relate the stories of the women who have inspired them, on Sunday (10 November) Clinton said, "A lot of “grown-up male leaders” are scared of teenage climate activist Greta Thunberg, the failed U.S. presidential candidate said, adding she finds it hard to understand the current state of politics."

Thunberg, an awkward child who is affected by Asperger's Syndrome and comes from a family of far left Swedish hippys, was included in the book when the mother-daughter duo read about her (carefully stage managed,) one woman climate protest in front of Swedish parliament.
“We were so moved by it,” Clinton said at Southbank Centre’s Royal Festival Hall.

Since then, steered by handlers who are experts in marketing Greta has become a media superstar sailing across the Atlantic in a hugely expensive carbon fibre yacht, the carbon fooprint of which was bigger than that of a Jumbo Jet, and speaking at the U.N. about climate change, both events Clinton claims add to the mystification of male political leaders, repeating a message she delivered in September when she gushed over Thunberg’s emotional speech at the United Nations’ Climate Action Summit, calling it “required viewing for every lawmaker.”

The question for Hillary is, "Why would anyone be scared of a 16 year old actress and puppet of the new world order carbon credit scam?" She's the puppet of her globalist handlers, spouts tired, discredited old left wing propaganda and appeals to emotions rather than logic and reason. She is not even a very good actress, as is demonstrated when she is taken off script and forced to answer questions from journalists.

You would expect the likes of Hillary Clinton, a politician whose ambition and sense of entitlement far outweigh whatever talent she may posses to embrace the Thunberg phenomenon though. It is typical leftist, feminist politics, shallow, emotive, populist and designed to facilitate the suppression of open debate by the hurling of insults such as "sexist", "bigoted", "fascist", and inevitably "white supremacist."

The left picked a kid with developmental issues to front their latest bid to create a global, authoritarian government because that way they thought they could avoid any scrutiny or reasoned argument on the basis that it would be easy to divery discussion to a personal level by simply labelling anyone who disagrees with attacking a disables child as a "far right conspiracy theorist," "science denier," or similar. This is feminist and cultural Marxist thinking at its most basic and counter-rational. It amounts to a form of emotional blackmail deployed in the service of advancing a political agenda. It demonstrates once again that the left is intellectually and morally bankrupt fighting the battles of the 21st century with failed the policies of the 1930s and a political philosophy from nthe 19th century.

The PR machine has done a great job in turning Greta Thunberg into a global sensation (for fifteen minutes,) but fortunately for us Hillary is far too well known to benefit from such a character makeover by propaganda. No matter how they try to sell her most people want to submerge her in a pond for an hour and when she comes up still breathing to burn her at the stake.

Is Hatred Of Greta Thunberg Justified?
As the backlash against the Greta Thunberg cult gathers momentum a lot of lefties are asking why the little Climate Warriorette is so hated by so many people. As usual with the left, they are asking the wrong question. Just as they asked, “Why can’t you believe the scientists, when in fact not only is it always legitimate (and scientific,) to question and challenge scientific theory, so it is perfectly rational and logical to challenge the Cult of Saint Greta ....

Stories The Media Ignored While Worshipping Greta Thunberg
There is No Climate Emergency Say 500 Climate Scientists
We’ve been saying it since this blog began in 2005 and before, the Climate Change scare is part of a power grab by the global elites who, unterstanding that Marxism is the most elitist political philosophy since the Patricians ruled The Roman Empire, have embraced Cultural Marxism and want to enslave us all in a …

Eco Nuts Are Back, Threatening To Shut Down Heathrow Planes at Heathrow grounded by a previous (unconnected) drone incident (Picture: www.lindaikejisblog.com/ )
Yesterday's story featured a bunch of eco - hypocrites, rock band The 1975, whose latest album features eco - wunderkind Greta Thunberg reading a plea for us all to adopy zero emissions lifestyles to save the planet and who will shortly be jetting off on a world tour to promote their message (and album sales of course.)

Zuckerberg Admits Facebook Interfered In Irish Abortion Vote After three years of Facebook campaigning for the impeachment and firing of Trump because of alleged cooperation with the government of Russia in the 2016 US election, the Social Media giant’s CEO Mark Zuckerberg has at last admitted what many of us suspected all along, that it is Facebook, rather that hostile governments which interferes in the political processes of democratic nations.<.p>

While Eco Loons Worship Fairies, Reality Exposes Real Cause Of Amazonian Fires While Pippi Longstocking lokalike and eco - activist wunderkind Greta Thurnberg is schlepping her climate change schtick round New York, preaching her net zero carbon emissions gospel after crossing the Atlantic in a 'zero emissions' superyacht made of carbon fibre, a material which in its manufacture produces shitloads more carbon emissions than my or your car or even my brother's V8 Range Rover will in their entire useful lives,) back home the Extinction Rebellion wankers have been getting their knickers in a twist about some fires (allegedly wildfires until it was reported they are started deliberately and are not destroying the rainforest, but areas of former forest now cleared for cultivation.

War and Politics Behind Mass Displacement in Africa, Not Climate Change – UCL
A report from a new study conducted by University College London’s may cause a stir in the climate scaremongering industry. The report challenges the academic establishment's standard narrative of mass displacement in Africa being principally responsible for the creation of refugees in Africa and casts doubt on a number of other assumptions about global problems.

Hurricane Harvey Climate Catastrophe Man Made?As we reported last week the Hurricane Harvey disaster which has hit the U.S. states of Texas and Louisiana has shown characteristics never before observed in any hurricane or tropical storm since records began. Meteorological depressions (because that is what hurricanes, typhoons and other intense storms are,) move and once over land quickly weaken as air pressures become normalised. Harvey has stayed in the same area, dumping massive amounts of rain on the heavily populated coastal strip and causing $$$billionsworth of damage through flooding and high winds.

Trump Announces US To Quit The Paris Climate Accord Fulfilling another campaign pledge, US President Donald Trump yesterday announced the U.S. would withdraw from the Paris climate pact and that he will work to renegotiate the international agreement in a way that treats American workers better. “So we are getting out, but we will start to negotiate and we will see if we can …

German Scientist Confims Climate Change Ia A Politically Motivated Scam Even as the inbred idiot Prince Charles was babbling to a hand picked audience about the skid marks in his underpants being caused by Climate Change, a somewhat more scientifically literate person, Dr. Friedrich Karl Ewert, a retired geologist and data computation expert, has confirmed what those of us dubbed 'climate deniers' have been telling you for years ...